Ellie Long has been swimming since she was seven years old—and competing in state-level meets before an adolescent growth spurt threatened her swimming career and changed her life.

X-rays taken during treatment for an unrelated abdominal issue when she was almost 13 revealed that Ellie’s spine had an abnormal degree of curvature (28 degrees).

Idiopathic Scoliosis (IS), a condition in which the spine begins to curve, also exhibits a three-dimensional element of rotation in that curvature. IS cases like Ellie’s vary widely regarding age of onset, and size and flexibility of the curve.

In Ellie’s case, no external clues were present; the X-ray that is normally required to confirm a diagnosis was the first indicator of her condition.

Ellie’s mother, Heather Long, remembers the diagnosis clearly. “Her pediatrician referred us to duPont and Dr. Shah, and he immediately said, ‘She needs to get a brace,’ so that’s what we did.

“No one in either my husband’s family or my family had ever had scoliosis, that we knew of. So I learned as I went along.” At the time, the Longs were living in New Jersey, and the brace selected for Ellie was a TLSO (thoracic lumbar sacral orthosis), developed by Lawall in conjunction with orthopedic surgeons at Nemours/Alfred I. duPont Hospital for Children. Several TLSO designs are available—all are lightweight rigid braces customized to fit the wearer, and they are usually worn under clothing for 18-20 hours per day.

The Wilmington Jacket required a cast of Ellie’s torso, and an X-ray taken while in the cast, to ensure best fit and optimum corrective value. The brace’s purpose was essentially to prevent Ellie’s 28 degrees of curvature from worsening to an extent that required surgery, which is indicated in cases where curves measure between 40 and 50 degrees.

Shortly after Ellie received her brace, her family moved to Chicago in August of 2013.

“At the time we moved,” Heather remembers, “she had not been through her major adolescent growth spurt. She was still 5 feet tall and gangly. But in late 2014 and early 2015, she grew about 6 inches within a year, and she could not fit into her Wilmington brace any longer. Her doctor gave her a script to get a new brace from an orthotist in Chicago.”

Heather was amazed by the difference in their approach to fitting Ellie for the brace: measuring her hips, bust, and waist with a tape measure, rather than taking a cast that would allow the brace to fit more intimately and precisely.

Initially, in May 2013, she reports, “Lawall used the X-rays taken by the doctor to make a mold of her shape based on the X-rays. Then, while she was in the mold, they X-rayed her before they even made the brace, to make sure it would work to correct her curvature. They had to create a brace that sufficiently applies pressure to the part of the spine that is curving, and straightens it. In her case, it looked good—it was like one degree off, so they were able to make the brace from that mold while we waited.

After minor trimming adjustments to make sure it was not rubbing or causing discomfort, Ellie had worn her brace home.

Ellie’s new total contact TLSO was ordered and created based on tape measurements, however, and when it arrived in December of 2014, she didn’t really like it from the start,” Heather recalls. “She said it wasn’t comfortable.”

Ellie began complaining not only of the discomfort, but of her conviction in February that her curve was getting worse—and she could feel it doing so. Her mother was told this wasn’t possible; and in any case, it was also impossible for her curve to worsen so dramatically in just two months.

When her parents began to notice that her curve was, indeed, visibly worse, they insisted on moving up Ellie’s scheduled appointment to early April.

“We went then and the x-rays were disheartening,” Heather explains. “As one of the top spine surgeons in the country, her doctor sees all variations of scoliosis and he was astounded at the abnormal progression of the curve and the rapid progression. He said, ‘This doesn’t even look like the same spine anymore!’”

The degree of curve had increased dramatically, (so much so that the doctor sidestepped quantifying it specifically), suddenly and unexpectedly. Feeling desperate, the Longs appealed to their surgeon, who could see their conviction about the Wilmington brace and encouraged them to fly back east and get another Wilmington brace for Ellie.

“I called Lawall,” Heather recalls. “And they expedited and got us an appointment in less than a week. They went through the painstaking process of fitting her for the brace—which is outstanding: When they X-rayed her wearing the new brace they had made she was at 1 degree of curve in the brace. The best they could get her correction in the total contact TLSO was 13 degrees.”

When Ellie was X-rayed a few months later in Chicago, her spine had improved dramatically—way down from the original 28 degrees, and back to a 16 degree curve.

The highly unusual outcome would have startled experts across the country, from Indiana Spine Group in Indianapolis, Texas, Children’s Hospital in Houston, and Shriner’s Hospital in Chicago, who delivered cautionary second opinions.

“All of those doctors agreed that what was done was done, and that brace was not going to fix the damage that had already been done,” Heather notes. “But it did. Ellie feels really grateful to Lawall and so do I—because after her curve worsened so sharply and so suddenly, I really never expected it to ever be this good again.”

Ellie’s orthotist at Lawall, Heather Michalowski, CO, was also delighted with her outcome. 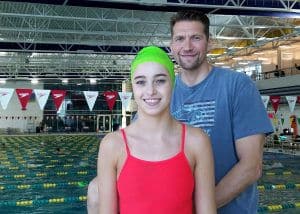 “We were thrilled that Heather and Ellie trusted us enough to put her care back in our hands,” Michalowski said. “Since they were willing to make the trip, we were happy to expedite the process, so as to not lose any critical time in the treatment of her curve. These success stories really speak to the effectiveness of the brace and make me appreciate the advantages we have with scoliosis treatment here in the hospital.

“Even with the most well-made brace, it only works if it is worn,” she added. “Ellie’s compliance is what ultimately led to the success of brace treatment and there is no better feeling than when the patient reports to us that they are done with brace treatment and have managed to escape any kind of surgical intervention.”

The brace—which she wore most of the time when she was not at practice or at a swim meet—enabled Ellie to continue swimming, as well as to compete in other sports and social activities, while preventing her curve from getting worse.

For Ellie, the brace has done its work well, as time has confirmed. Now a high school sophomore at age 16, Ellie is 5’7 .” tall, and has largely reached her growth ceiling and passed the threat of further curvature affecting an unsupported spine. So, in February, the brace was shed like a chrysalis, and Ellie is enjoying her new freedom. After several months without it, Heather reports, Ellie’s curve measured 21 degrees, which is good news.

“She’s done phenomenally well,” says Heather, who points out that since coming out of her brace, Ellie has also dealt with a severe concussion, a lingering bronchial infection, and a lengthy recovery from shoulder surgery—which have effectively benched her from swimming for many months.

Nonetheless, she has competed at the state level and qualified for USA Swimming Speedo Sectionals,—and looks forward to significant advancement in the future.

Her mom’s advice to other parents facing a scoliosis diagnosis for their children?

“One thing is not to read too much online, because there’s different research about how quickly the curve progresses—I got myself into trouble by doing that. It’s really scary. Listen to your doctor—and find out if the Wilmington Brace is available and appropriate for your child. I’m completely biased—because I saw what it did for Ellie.”