Jade: The Miracle Within Yourself

Jade was 14 years old when her healthy life took an unexpected turn. Her symptoms started with drooling, blurred speech, being tired all the time, and a loss of balance. As a young teenager she found herself embarrassed and unwilling to talk about her symptoms with others. She was scared and unsure of what was going on with her health. It wasn’t until she was physically unable to eat her dinner one night that her mom took her to the hospital. 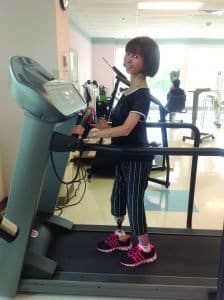 After two weeks of testing doctors concluded she had Wilson’s disease. Wilson’s disease is inherited as an autosomal recessive trait. It results in excess copper accumulating in the individual’s liver. Copper is essential in the development of healthy nerves, bones, collagen, and skin pigmentation. The body will absorb the appropriate amounts of copper and the excess is discarded through bile, produced in the liver. Symptoms of Wilson’s disease usually begin between the ages of 12-23. If diagnosed early the disease is treatable. However, if the copper continues to accumulate, it can reach a life threatening level.

Unfortunately, Jade was not immediately diagnosed. The copper build up in her system resulted in muscular problems. She experienced painful muscle spasms throughout her right shoulder. “It felt like someone was ripping my muscles inside out.” At first, the pain was during the day, but it progressed to a point when it was all day and night and completely unbearable. Over the counter pain medication was not sufficient and for months pain relief could only be achieved through morphine and Valium, which was not going to be a long-term solution. Furthermore, at this point her speech was completely gone and she was very weak from months of hospitalization.

Jade’s doctors recommended she try Botox injections and along with intensive therapy, the treatment began working. At 16 years old, things started looking better for Jade. She was independent once again, but this independence did not last long. It was worse this time because she got to a point where she was completely bed bound. Her back was becoming deformed with scoliosis and her right ankle developed inversion and plantarflexion contractures. She could not even tolerate sitting up for a few minutes. After several more attempts with various procedures and pharmaceutical interventions, Jade’s mother decided to take her back to Vietnam to try alternative cures. Jade was born in Vietnam and had come to the United States when she was 3 years old. In Vietnam, Jade was able to get to a point where she could tolerate sitting in a wheelchair for a long period of time. At the age of 18 she then returned to the United States to finish high school, with honors and even attended the prom! She started college at New Jersey City University, but after two years it was no longer financially feasible. 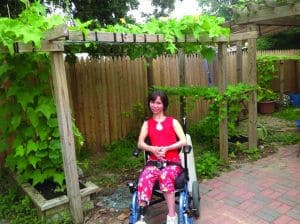 Her physiatrist recommended she try a baclofen pump, which worked to loosen up her right arm and leg, but not her ankle. The contracture at the ankle was so severe, it prevented her from weight bearing on her right leg. Despite being bound by a wheelchair, “she was no couch potato!” She was able to get around in her wheelchair and was independent. She crawled and walked on her knees when she had to and was able to get in and out of bed on her own. Life wasn’t easy but she was no longer in pain.

Jade’s physiatrist continually encouraged her to see an orthopedist. However, due to a language barrier and some issues with insurance coverage, Jade did not see an orthopedist for several years. Finally, after 17 years of being in a wheelchair, Jade consulted an orthopedist, and he gave her a glimmer of hope. He said there was a possibility she could walk again, if her right leg was amputated below the knee. He also repeatedly reiterated the incredible amount of hard work and dedication it would take, and even then there would be no guarantee she would be able to walk. Jade chose to have her right leg amputated, because at this point all she ever hoped and prayed for was a chance to walk again.

After the amputation, Jade was measured for a Flotech IPOP, which is an immediate post operative prosthesis. It features a fully padded thermoplastic socket with a pylon and foot attached. There are many documented advantages to using the IPOP. It will maintain compression on the limb, protect the limb, help to reduce post surgical swelling, and when a patient wakes up after surgery they don’t see the void of their amputated limb. Furthermore, gait training can begin within days. For example, Jade was weight bearing on her residual limb the day after surgery. However, it must be noted IPOPs are not ideal for every amputee. The decision to use an IPOP is made prior to surgery through consultation with the surgeon, prosthetist, patient, and other valuable members of the care team.

Jade has progressed through both inpatient and outpatient rehab. She is very grateful for the support her brother, mother and friends have given her. They have supported her through thick and thin along her journey. Her prosthetist, Matthew Oppedisano, is delighted their paths have crossed. “Jade has always been a pleasure to work with. She is an inspiration to us all with her, never give up, attitude.” In addition to Jade’s incredible work ethic and belief in herself, another one of her great strengths is her ability to set realistic goals and remain focused on achieving them. For example, initially she wanted to be able to safely ambulate with a walker. Now that she has accomplished this goal, she is determined to walk independently. She is so happy to no longer be confined to her wheelchair. She knows she has lost her limb but she believes she has gained so much more from losing it. Her advice to others is “Don’t give up. As long as you try your best that’s all that matters, and don’t take anything for granted! The miracle is within yourself!”

You can see a video of Jade progressing through her rehabilitation process at www.lawall.com.