There’s more than one reason that her prosthetist calls Megan Yocum “Wonder Woman.” When the odds are stacked against her, she wins through–and as each new obstacle arises, she comes back fighting!

Her anxious wait for a life-saving liver transplant was rewarded with relief in 2015—only to be replaced by crushing disappointment, as the transplanted liver brought bile disease with it. The diseased liver spread infection throughout her body, weakening and destroying her nervous system by stages during the two years that she waited for another liver transplant to replace it. The delay took a fearful toll on her body, and evolving neuropathy left her unable to walk.

“There were even a few times when they were afraid that I wasn’t going to make it,” Megan recalls. “But lo and behold, a new healthy liver came just in time!”

Her second transplant, however, still left her in a wheelchair, diagnosed with Chronic Inflammatory Demyelinating Polyradiculoneuropathy (CIDP), a rare autoimmune disorder that resulted in weakness, drop foot, and loss of mobility in her ankles and toes. 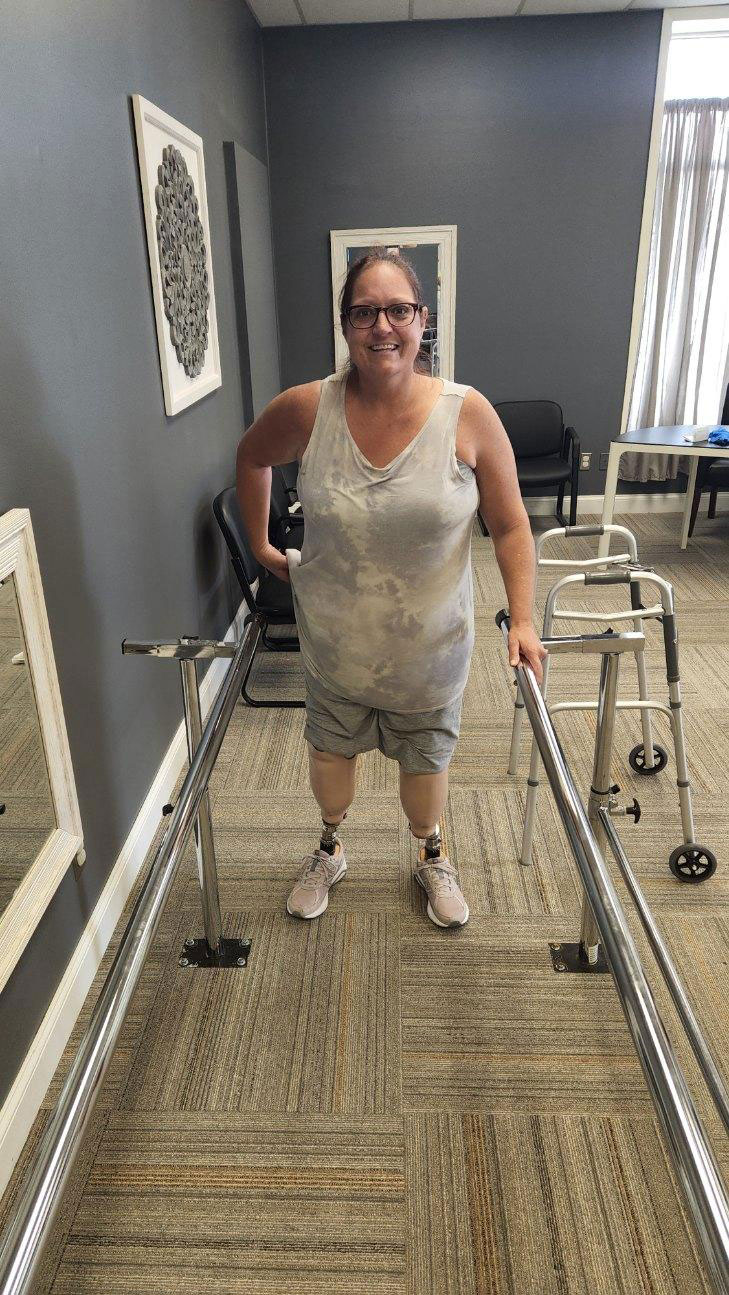 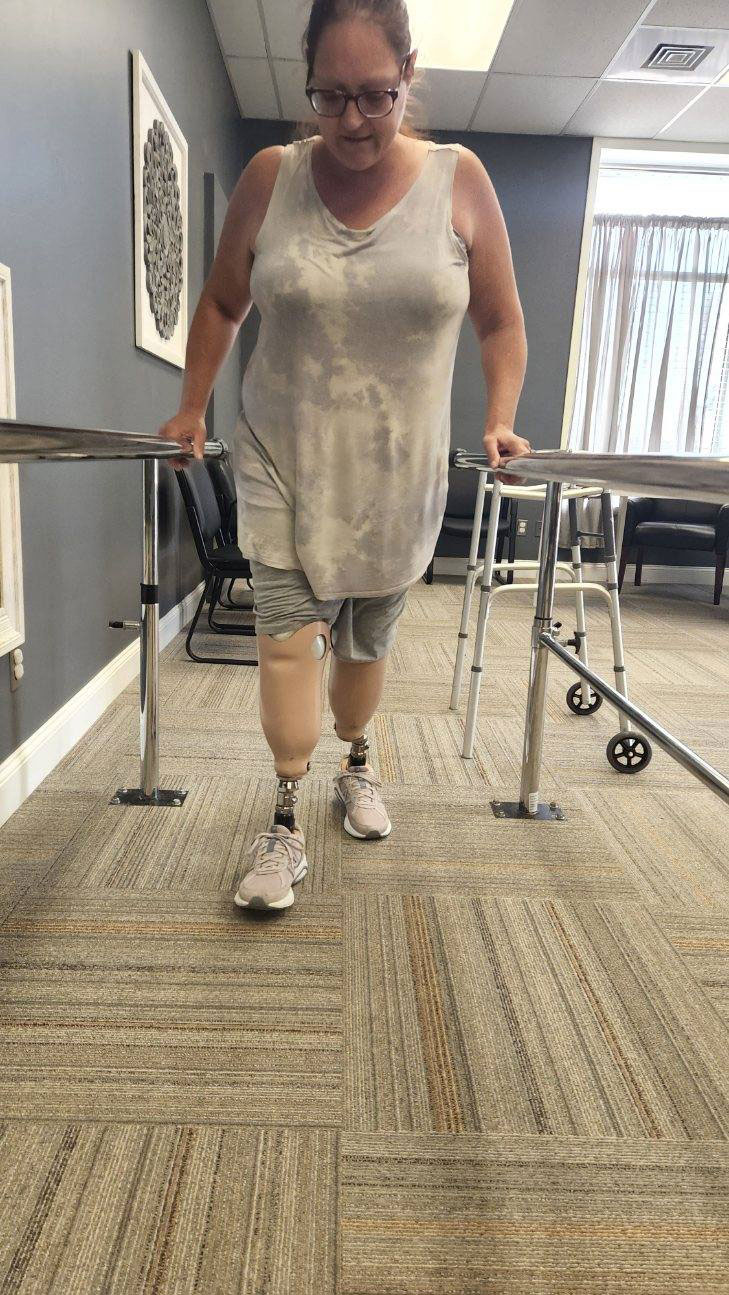 Therapy briefly helped her to ambulate by shuffling with a walker, but within a few weeks, she had lost all feeling in her legs. Although she struggled, despite her best efforts at several different rehab facilities, all were unsuccessful.

“Nothing was working. It was just no good. I was unable to put any weight on my feet,” she remembers.

Four months after her August transplant, Megan came home in December 2019 in a wheelchair. Then Covid hit.

“That was fun,” she reflects grimly. “About three weeks after Covid arrived, my toes started turning purple and black. They said my circulation was poor and I now had peripheral arterial disease. They amputated all the toes on my left foot; then it began affecting the right foot and they amputated the right big toe, too.

Three different consultants told her she would never be able to walk again—“‘Absolutely not!’” she quoted them.

That’s when the indomitable Megan decided, “Look! I’m only 45—and I’m not spending 40 more years in a wheelchair!

While exploring the possibility of supportive leg braces, she learned of another option: elective amputations of both legs, and the fitting of transtibial (below-knee) prosthetics to replace them.

Her prosthetist, Lawall’s Frank Colucciello, CPO, met with her at her home to discuss how her life would be different and better with the bilateral below-knee amputations recommended by the orthopedic surgeon.

“It was a tough decision,” she admits. “Very scary. I couldn’t believe I was going through this again—something new, something else to heal from—more pain!”

But after thinking it over for a couple of weeks, “It was a no-brainer!” she realized. “God made these legs for people so they can actually walk again! I had to do it –and I DID it!”

There was no magic wand to make it happen faster or easier. Despite all the previous work she had put into rehab efforts, stretching long-unused hip muscles and struggling to walk independently, Megan’s bold decision to choose amputation put her back into the wheelchair she had been using for three years.

Some people might have found the situation deeply upsetting and depressing, with a continuing series of strengthening, balance, and posture exercises representing yet another mountain to climb toward rehabilitation. 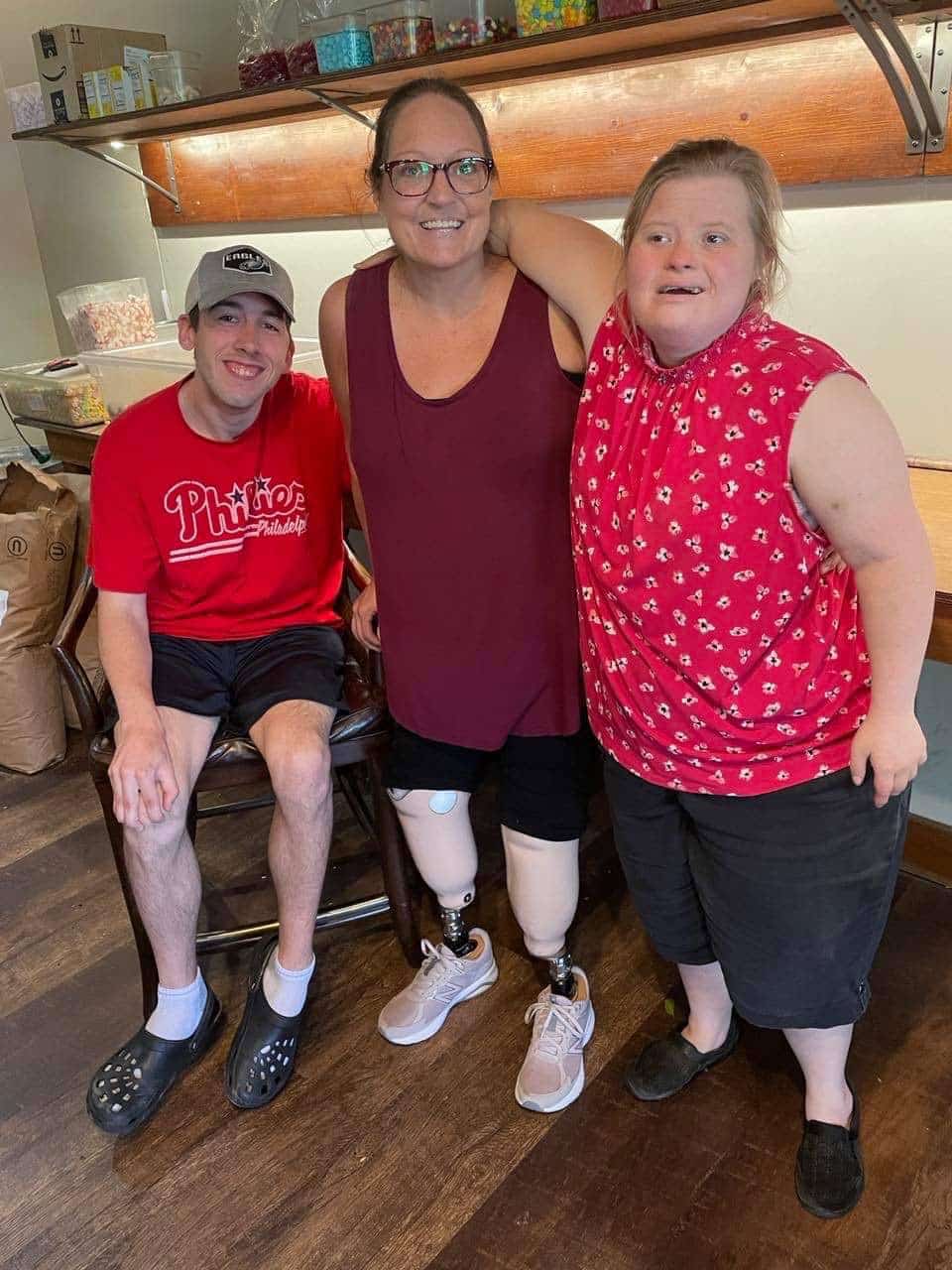 But Megan’s focus is on the future, and she was consumed with excitement and impatience, counting the days till her new legs would be ready.

Six weeks after her February surgery, she met with Colucciello to experience what walking would be like in a pair of check sockets custom-fitted to her residual legs.

“It was awesome! I actually stood up right away! I was so excited, I took a few steps forward and backward; it was really cool!” she enthused then. “I do know that it’s going to take a long time to get used to it and ‘feel’ my feet. It’s been a lot of work, but I’m doing it!”

By mid-May, she had graduated from in-patient rehab at Moss Rehab, and was doing a spectacular job of navigating with her new prosthetic legs, according to Colucciello.

“She sent me a video showing her walking with two canes—and she was walking all over the place! Within a month, she’ll only be using one cane, if any!” he predicted. “She’s amazing; amazing beyond belief!”

“It’s a big learning lesson,” Megan admits. “It’s a lot to get used to, a lot to remember, a lot to concentrate on; but every day I’m increasing my wear time a little, and getting better every day!”

“She is incredibly positive and motivated,” Colucciello marvels. “I’ll be popping in to see her periodically, just because I love going out to see her! She’ll be in outpatient therapy, and I’ll be working with her there, as well.”

The admiration and respect is mutual. Colucciello was one of the people who had originally advised Megan that braces wouldn’t work for her, and described how prosthetics could.

“Ever since that first meeting, I decided that’s the guy who will be making my legs,” she says. “Frank is phenomenal!” 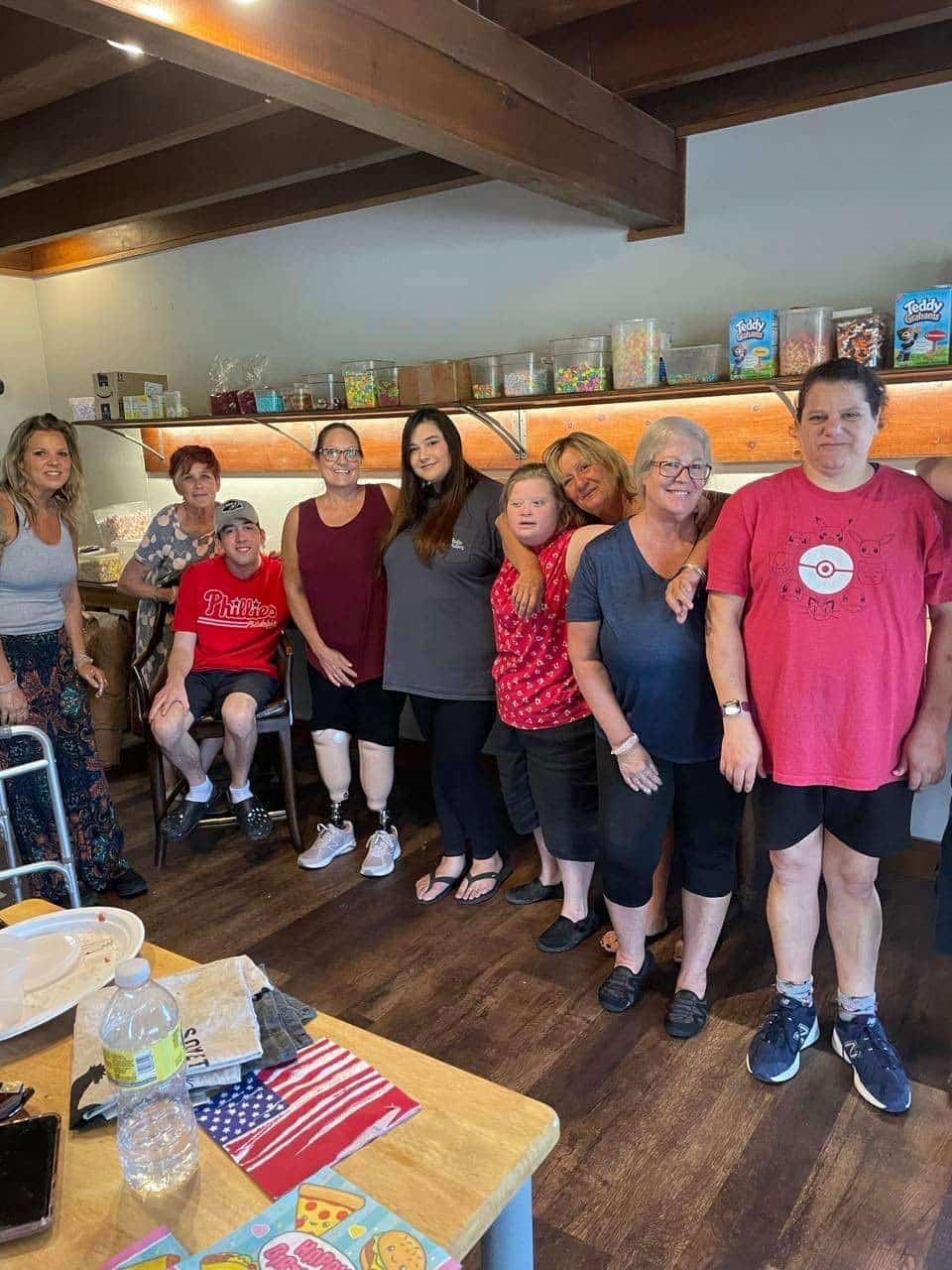 Support Is a Two-Way Street

Megan’s essential support system includes her parents, sisters, and a younger generation of family—with all of whom she shares a home. She relies, too, on a raft of friends and coworkers.

Not content to remain on the receiving end of support, goodwill, and assistance, however, Megan volunteers three days a week at the Day Break Farm Muffin Company, which provides jobs for individuals with special needs. The owner turned a former tack shop into a small bakery powered by the efforts of workers who prepare the batter and add the candy centers to baked treats for horses—then package, label, and box them for shipping.

Time Out for Art!

When she’s not working on improving her walking skills and speeds, Megan finds time to exercise her creative talent and her flair for color and style by designing an ongoing series of all-occasion greeting cards which are sold at local art galleries. An artist since childhood, she works largely in acrylics, and has recently switched to a more abstract style because it’s easier on her hands, which continue to be affected by neuropathy.

Although she admits that it takes longer than it used to, she still executes charming detail in the popular light-hearted greetings.

Thrilled by her speedy progress toward greater independence, as well as the unsinkable spirit that has helped her to surmount a series of daunting challenges, Colucciello continues to refer to Megan as ‘Wonder Woman’—and she calls him “a good guy” with simple sincerity. 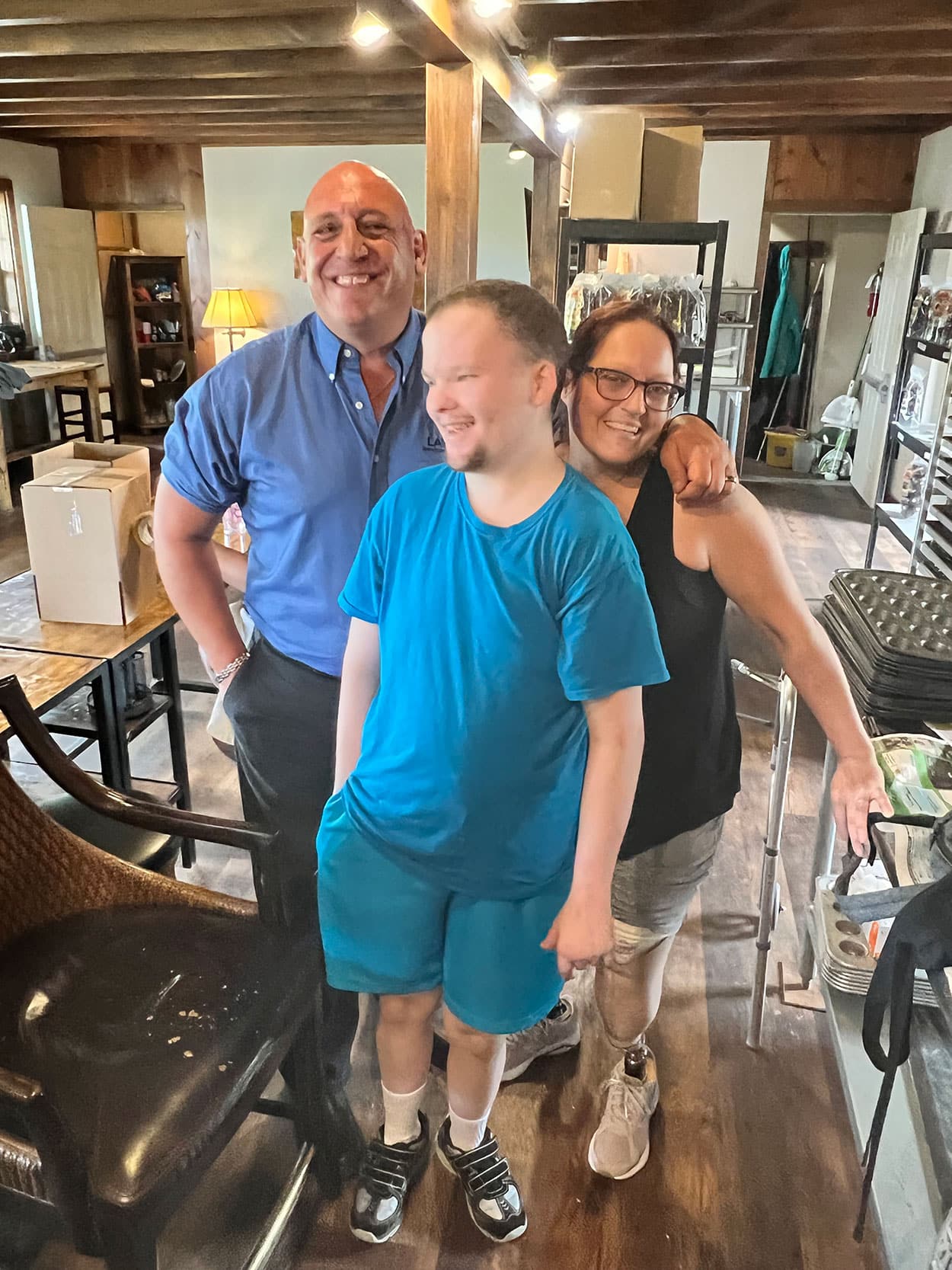 Megan is enthusiastic about the program and proud of the quality of the work the kids do and their joy in doing it. “It’s really cool to see them excel in different jobs—and some can do everything really well! It’s a wonderful opportunity and I love being able to help.”

The setting, too, offers interaction with the farm animals, including Lenny—a ‘really nice rooster’ who hangs out with the bakery staff. “It’s soothing, very therapeutic for them to be around animals,” she points out.

Even Megan’s personal goals for her new prosthetic legs are centered on helping others. She’s already planning a 5K fundraiser event, in which she’ll compete, using a walker.

“I already have a lot of people signed up, and we’re going to raise money to help people with amputations,” she explains happily. “I’m just excited to be able to walk again; my friends know how I feel and they’re eager to participate, too. I’m really looking forward to that opportunity to walk with everybody that I love!”

The hardest part of his job, he reflects, is never being truly able to walk a mile in his patients’ shoes.

“I’ve been doing this for 20 years and I can’t count the thousands of arms and legs I’ve probably made; but I still don’t know what it’s like to get up in the morning and know that I have to put on a device in order to walk. I have the greatest respect for Megan and her courage, commitment, and confidence, and I’m glad that I could help her out. It’s been a journey—and I’m grateful for it!”