“Will I Be Able to Continue Playing Sports?” Thirteen-Year-Old Faces the Realities of Amputation

In the summer of 2011, 13-year-old Larry Jackson, Jr. of Boothwynn, PA sprained his ankle while playing baseball. It seemed like just a minor injury, but soon afterwards the area around the ankle began to swell. At first his family attributed the puffiness to the sprain, but after a couple weeks of continued swelling they became more concerned and took him to see a podiatrist. After examining Larry, Jr. the docto r was equally concerned and referred him to Dr. Dormans, the chief of orthopedic surgery who specializes in spine and tumor cases. Dr. Dormans diagnosed him with Ewing sarcoma and within a month, he was admitted to The Children’s Hospital of Philadelphia to undergo intensive chemotherapy treatments. 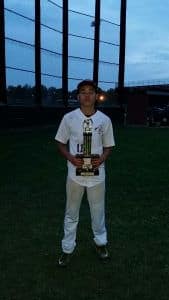 Ewing sarcoma is a cancerous tumor found in a bone or the soft tissue surrounding the bone. Despite the fact that it is the second most common form of childhood bone cancer, it is still very rare with only about 200 children being diagnosed in the U.S. each year. About half of all Ewing sarcoma tumors occur in children and young adults between the ages of 10-20, and cases in patients over age 25 are exceptionally rare. Ewing sarcoma is a very aggressive form of cancer and early detection is key to successful treatment. Treatment often combines some form of chemotherapy, surgery, and radiation.1

After being advised by doctors about the need for amputation, the elder Larry contacted research centers working with Ewing sarcoma patients to search for possible alternatives, even going so far as to look into the possibility of a limb transfer. However, everyone he spoke with confirmed his fears that the best option for his son’s condition was amputation.

Despite those recommendations, Larry, Sr. continued to struggle with the notion of an amputation until a question came up during a candid conversation with his son one night. Larry, Jr. simply asked his father, “Will I be able to continue playing sports after the amputation? His son had come to the realization that as long as he could continue to do the things he enjoyed most in life, then amputation was the best option. 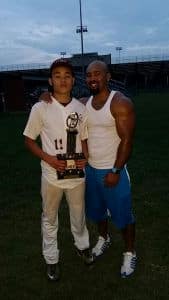 Facing the struggles of chemotherapy, physical rehabilitation and what others might think or say never bothered Larry, Jr. As long as he could continue playing sports, he knew he could make it. However, the road back to playing sports again was not an easy one for Larry, Jr. despite his positive outlook on life. The side effects from the chemo treatments were horrible and really took a toll on him towards the end. It got to a point where his body needed six weeks in between treatments to recover. Finally he made it through his chemo treatments and was determined that nothing could stand in his way. He was leaving the past behind and focusing on all the great things he had ahead of him.

Fortunately, throughout it all, Larry, Jr. had a great support system to push him through. His family, friends, coaches and teammates encouraged him. They visited him often, played games at the house for hours, and even shaved their heads in solidarity.

Prior to getting his prosthesis, Larry, Jr. came to Lawall’s Philadelphia office for a tour of the facility from his prosthetist, Darin Oskison, CPO. Darin enjoys working with Larry because he is so active and such a great kid.

While this intense activity level can be exciting to witness, it comes at a price. Larry, Jr. continually pushes his prosthetic components to the limit! He is known for breaking his feet, despite the high activity level they are designed to withstand.

“Truthfully, Larry is the type of person we as prosthetists look forward to assisting because of his unstoppable attitude,” explained Oskison.

The first foot Larry, Jr. broke was the day before Thanksgiving. He and his family were so disappointed because they didn’t think Larry would be able to play in the Jackson family’s annual Thanksgiving Day football game. Since this was the first year after his amputation, Larry, Jr. was anxious to demonstrate how well he was doing with his prosthesis.

“I will never forget Darin meeting me in the parking lot of a Wawa convenience store near my home on the eve of Thanksgiving to exchange the broken foot for a new one so my son could play the next day”, said Larry, Sr. “After that night I knew we would never leave Darin. We definitely chose the right prosthetist for us!”

Larry, Jr. will be starting his junior year of high school next month. He plays centerfield for three baseball teams and is starting his college search. Larry wants to attend a college that will prepare him to have impact on the prosthetic field, so he is thinking about possibly becoming a prosthetist or an engineer who designs prosthetic feet!