Dressed for battle, 10-month old Paul Hassler is happy, confident, and winning his war with plagiocephaly and torticollis, thanks to the otherworldly headgear he will soon outgrow.

Cheryl Hassler, Paul’s mother, experienced the same perplexity and concern as any new mother when she recognized a flat spot on the right side of his head at birth (plagiocephaly). Following the doctor’s advice, his parents kept an eye on it for a time, and noticed that Paul’s head was also tilted to the right side.

Born a twin, Paul’s cramped position in the uterus he shared with his brother may have resulted in a tightness in the muscle that connects the breastbone and collarbone to the skull, his parents discovered. This condition (torticollis) caused Paul to continue to tilt his head, and to preferentially lie with his head on that side—increasing the tendency of the plagiocephalic flat spot to develop further.

While the flat spot itself was not an issue, Cheryl also noticed what appeared to be a “lazy eye” on his right side. The physical therapist to whom they were referred, however, diagnosed the condition promptly, identifying a 10 mm rightward shift of his eye and ear.

The Hasslers eventually found their way from Coatesville, PA., to Lawall Prosthetics and Orthotics, where orthotist Harry Lawall III, CPO discussed the need for a cranial orthotic—a custom-created helmet with shape-correcting capabilities.

Left unchecked, the danger of the rightward shift of Paul’s eye and ear continuing was very real. At that time, when he was nearly seven months old, his right eye and ear had shifted more than half an inch, according to Lawall.

Since experts believe that a baby’s skull resists reshaping as the bone thickens, 12 months of age is generally regarded as the “deadline” date beyond which such therapies are ineffective.

After just two months of treatment, however, Paul’s measurements indicated that his deviation from center had then been corrected to only 3/8 inch—already a ¼ inch improvement from the original measurement—and was now only 1/8 inch away from their goal.

“He’s been wearing the helmet for five weeks now,” Cheryl confirmed, “and the first time he was re-measured, he was down 1/8 inch, and this time he was also down another 1/8 inch, so it’s working. Harry (Lawall) thinks it should be off by Paul’s first birthday—which is in October. It all depends on the child, but in Paul’s case, he’s taken to it and is doing great.”

From the first, she made a game of it, telling him he was a football star in training. “To this day, when I put it on, I’ll use my nails and tap it and say, ‘Is it on? Is it okay?’ He even reaches for it and wants it back on when he comes out of the pool,” she marveled. 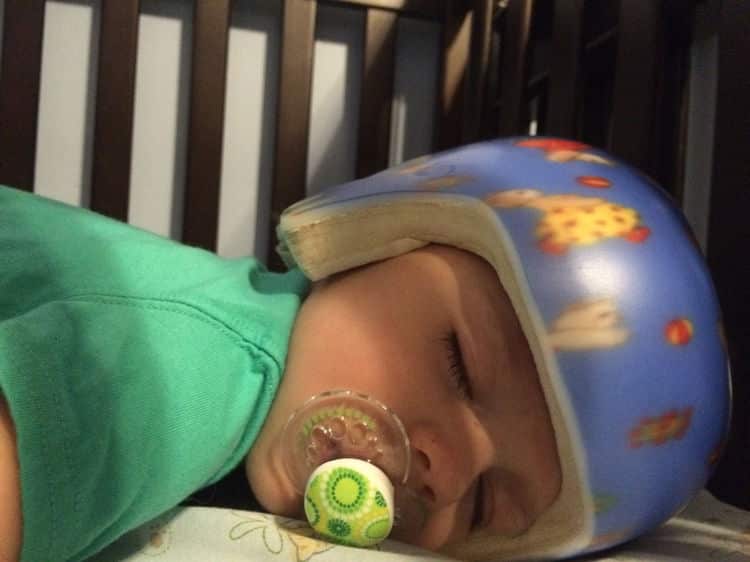 Top Technology to the Rescue

Lawall Prosthetics & Orthotics has been a leader in cranial orthotics since receiving one of the first twenty scanners in the country back in 2003. The company recently added state-of-the-art SmartSoc™ 3D scanning systems to three of their office locations.

“Paul was one of my first scanned patients,” said Lawall, “which made the fitting much easier than doing a traditional plaster mold of his head shape, and allowed less room for error in the final fitted helmet. A bad scan is better than a great cast, they claim, and although we are still seeing great results with the casts, fitting pediatric patients with a scanner is just less taxing for both the family and the orthotist.”

The anxiety level of a young child can be greatly increased by being wrapped in plaster, he pointed out. “With the scan, I just take 12 pictures of the head, rotating around it, and we’re done. It takes about two minutes.”

The most advanced device is only half the battle, however. A lot depends on compliance, Lawall said.

“Paul is a very compliant patient, so we’re seeing good results. These helmets also require a lot of follow-up visits; it’s a big commitment for the families. We’re constantly measuring, constantly making sure that the helmet is fitting correctly and needed adjustments are made promptly.”

Instead of creating a new helmet each time to keep up with the child’s growth, he explained, the original helmet is designed to accommodate anticipated growth, with interior layers that can be removed as necessary.

“We include about four layers of padding; then, as the head grows and begins to reshape, we take out layers in the flat area to promote growth in that quadrant.

The helmet, which must be worn 24 hours a day except when bathing or in the pool, is something the child adjusts to gradually.

“The first day it was only an hour, then we increased it and now he’s up to 23 hours a day. He sleeps in it,” Cheryl noted. “It was kind of weird, but in our case, he seemed to just take to the helmet, and didn’t mind wearing it, so he was a good patient, really.” 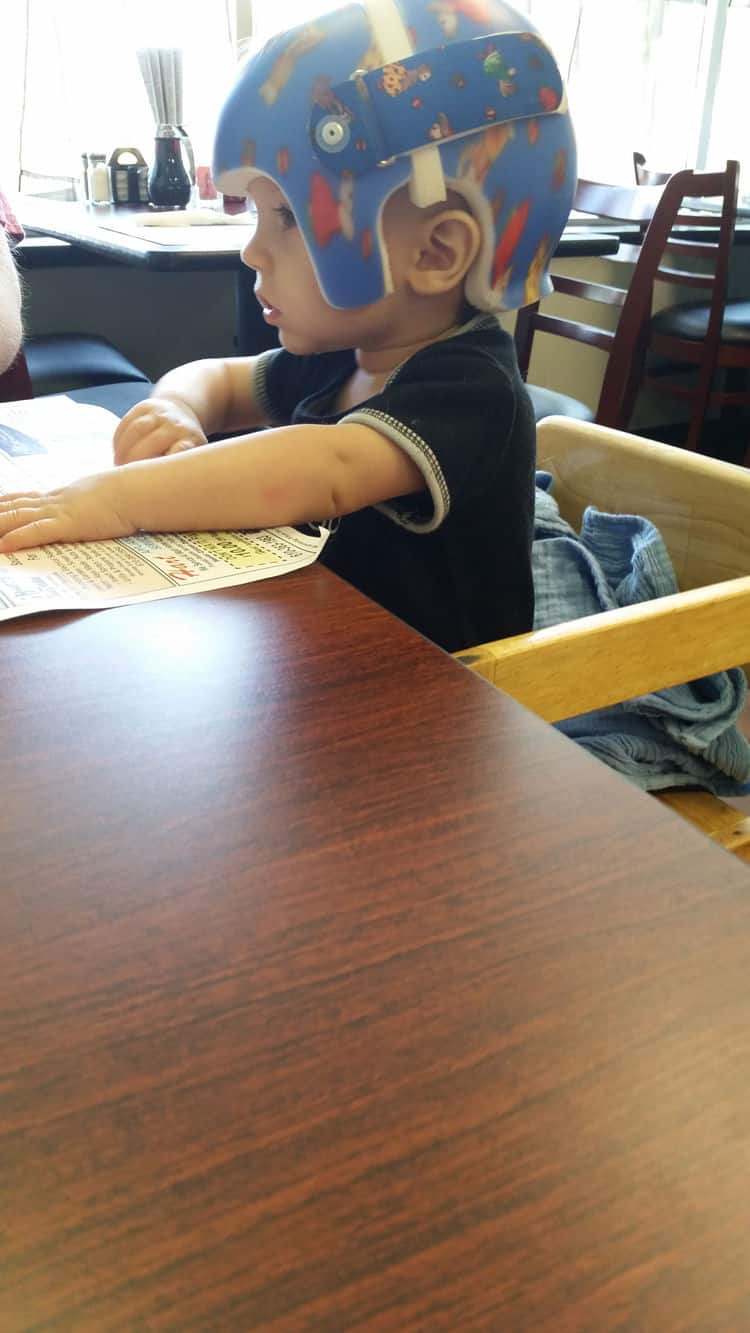 She confessed to the natural anxiety of a mother faced with fitting an alien device on her baby’s head, initially blaming herself for Paul’s condition before learning that twins are simply more vulnerable to this condition due to the added pressures of a crowded womb where movement is constricted; it’s not predictable or preventable.

Premature singletons are also more susceptible to positional plagiocephaly, she learned—because while kept in hospital care, they are typically placed on their backs; pressure on the back of their skulls can allow a flat spot to develop.

(Paul and his twin, Cody, were born five weeks prematurely, and spent their first five days in the neonatal intensive-care unit (NICU).)

“We also had anxieties about what Cody was going to think about the helmet —because they were used to seeing each other every day,” Cheryl recalled. “Believe it or not, it doesn’t bother him. He gave Paul a weird look the first day, but that was it. Then he just kind of went ‘Whatever,’ and moved on. They both adapted to it without any issues.”

The helmet weighs about a pound, and the added weight may play a role in correcting the effects of the torticollis, helping to strengthen the neck and address any muscular deficit there.

Although it’s not difficult to put on and take off the helmet, it took a few days for Cheryl and her husband Bill to learn and get comfortable with the process.

“Sometimes it needs adjusting; Harry just added some more padding to the back because the helmet kept shifting forward,” she said. “It also needs simple daily maintenance, in the form of cleaning and disinfecting with alcohol.”

There are other small adjustments that become necessary, she reported. “When we feed him a bottle, he has to lay his head in a certain way; I’d rather have him in a comfortable position than me.”

Their greatest challenge, however, has been the extreme heat.

“Because he is so little, his body has to work harder to regulate the temperature, and he sweats badly inside the helmet. We’ve been trying to keep him inside, in the air conditioning, on these ungodly hot days.”

Does wearing the helmet slow Paul down? –hinder development or activity levels?

Cheryl laughed. “Not so you’d notice! He’s not only keeping up, he’s surpassed his twin! We have them in walkers and he is a crazy child! He runs into everything at full steam ahead. The other day he actually crashed through a baby gate, then looked back at me and laughed, like ‘Ha-ha! I got through it!’

“We wondered if it’s giving him a false sense of security, since now he whacks his head and doesn’t feel anything!”

Lawall acknowledges that families are sometimes concerned because their child has been wearing the helmet for six months, and has grown accustomed to having this 24-hour protective barrier in place.

“After they’re done with treatment, sometimes the helmet will still fit, so we can do a weaning off process,” he explained. “You leave the helmet on for two hours, then take it off for two hours—just so they get accustomed to having it off.”

The bottom line, however, is that it’s working, said Cheryl, and it’s working much more quickly than she had expected. “People who haven’t see Paul for a while can actually see the difference, now. I was expecting him to make slow and gradual progress, but this, to me, is going fast!”

Advice to Other Parents of Plagiocephalic Children:

Cheryl and Bill Hassler stress the importance of (a) finding an experienced, pr gressive and trustworthy orthotic provider to guide and support you and your child through the process, (b) researching the subject and asking your doctor lots of questions—and above all, (c) not hesitating, but moving forward as quickly as possible after the diagnosis.

“The Lawall folks have absolutely been helpful—just terrific to us,” Cheryl noted. “Harry explained to us that although there will be some shifting in shape as the child’s head grows, once it reaches a certain point it will not correct itself. So you only have that brief window of opportunity and need to make your decision in time. Waiting to see what happens is a good way to run out of time. Don’t hesitate. Get it done.”

Bill agreed strongly, “You are your child’s advocate right now. We didn’t want Paul to have issues as he was older, if we did not have it corrected. Your child will have to live with your decision for a long time, so it ought to be the right one.”

“I would highly recommend the cranial helmet to anybody whose child has this problem,” added Cheryl. “Don’t hesitate to talk to your doctor about it, and don’t hesitate to get it. I’ve seen firsthand what it’s doing for my son.”