Malachi Stone was hospitalized with Pneumococcal pneumonia when he was 2 years old. Pneumococcal pneumonia is a form of pneumonia that infects the upper respiratory tract. It can then travel to the blood, lungs, ears or nervous system. It is most dangerous for children under 5 and adults over 65. For Malachi, it resulted in end stage kidney failure. Aside from being on dialysis several times a week, he also had both of his legs amputated below the knee, his left arm amputated below the elbow and several of his digits on his right hand amputated. Initially, Malachi was fit with prostheses after his amputations, but he seldom used them. He was constantly tired and the degree of swelling in his legs was always fluctuating. 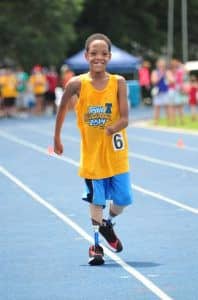 In 2009, at St. Christopher’s Hospital for Children under the care of Dr. Schwartz his life changed forever. His father was able to donate one of his kidneys to Malachi. His mother proudly speaks of the immediate change in her four year-old-son. She enjoyed watching him get stronger over the next several months.

After he was discharged from St. Christopher’s in October of 2009, he went to Shriners Hospital in Philadelphia where he received outpatient therapy and was fit with new prostheses by Lawall Prosthetic & Orthotic Services.

Malachi began to thrive.Over the next couple years, Malachi continued to progress and enjoyed being an active, healthy, young kid. Currently, he wears his legs all day at school and enjoys playing kick ball and baseball with his classmates. While at home he keeps busy playing with his favorite superheroes, which are Batman and Spiderman, and going out to the movies with his family. Malachi loves his family very much. They are the strength he pulled from when he was sick and they are his motivation to keep fighting.

Last summer, Malachi had the opportunity to represent Philadelphia during The Transplant Games of America held in Houston, TX. 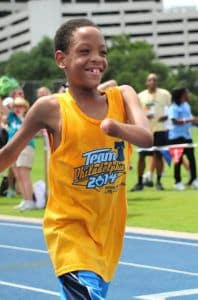 The Transplant Games is a multi-sport festival event for individuals who have undergone life-saving transplant surgeries designed to promote the need for organ & tissue donation. The Transplant Games show the world that transplantation is a treatment that works. Over the years, it has brought together donor and recipient families. For Malachi, it was an opportunity to showcase what he can do with his second chance at life.

He participated in a softball throw, basketball games and also track and field. During the track event his mom was interviewed by Jim Melwert of KYW where she stated “He’s all smiles right now, he smiled the whole way through the race. And for him to be out in this kind of heat, and being a recipient of a kidney, and see him smiling all the way through, it just heals, it just heals the heart.” It was a wonderful experience and one that Malachi and his family will never forget.

After returning from the games Malachi’s mom began to inquire about the possibility of running legs for her son. She spoke with his prosthetist, Dave Lawall, CPO who agreed it was something they should certainly pursue. Malachi and his mom love Dave’s hands-on approach. They believe having a great rapport with Malachi’s prosthetist is essential to maximizing his potential. 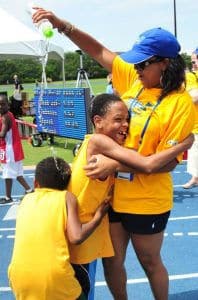 Malachi was fit with his running legs in October of 2014. He is now going to physical therapy at Shriners Hospital and InStride Therapy, in Springfield, PA. At InStride Therapy, his physical therapist, Joe Ricci, MPT has developed a treatment program for Malachi. He is building a strong foundation of proper techniques and good habits starting with balance, strength and endurance training enabling him to properly control his prostheses. He is also doing drills like step-ups, walking backwards, and braiding. As he progresses they will start to work with wobble board activities and having a catch while standing on a Bosu, which is a training tool used to help improve a patient’s strength and coordination. Joe has even been able to incorporate some of his strongest supporters into the therapy drills. For example, Malachi looks forward to playing soccer and racing with his brother Navin at the end of each session.

Malachi is an inspiration to everyone he meets. He is an amazing kid with an amazing story and an incredibly motivated individual. His motivation coupled with his strong family support will enable him to accomplish any of the goals he sets for himself. Joe has been inspired by both the level of support from his family and Malachi’s desire to improve himself. “I really enjoy working with him as his therapist, I feel blessed to have met him and his family; and I’m looking forward to helping him achieve some of his goals down the road.” 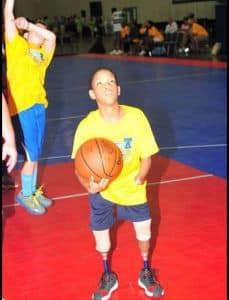