Katie Verdi: The Whole World Smiles with Her

Katie Verdi’s contagious smile began charming the world before she could walk—and it has seldom dimmed since, despite her ongoing battle with a relatively rare genetic condition known as neurofibromatosis Type 1 (NF1). Type 1, the version of neurofibromatosis that usually appears in childhood, has caused abnormal bone growth in her lower legs, requiring the support of a colorful pair of intentionally mismatched braces which keep her moving, dancing—and smiling. 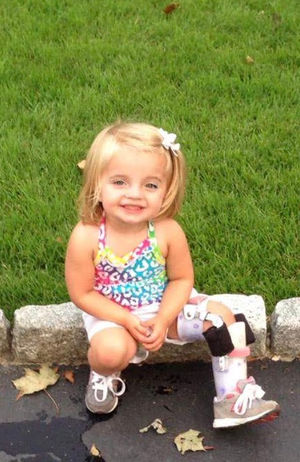 Now 7 ½, Katie was diagnosed with NF1when she was just six months old. A slightly bowed left leg and the presence of several ‘café au lait’ birthmarks—which are also early indicators of the disease—led her parents to consult medical geneticist Karen W. Gripp, MD, since the condition is shared by other family members. Dr. Gripp confirmed the diagnosis and counseled them regarding Katie’s care and continued monitoring of her situation, noting that NF1 is one of the most common dominantly inherited genetic disorders, occurring with a prevalence at birth of approximately one in 3,000 people, and its clinical manifestations are extremely variable.

A subsequent consultation with pediatric orthopedic surgeon Mihir Thacker, MD, resulted in Katie’s first visit to Lawall in June 2014, where Harry (Bud) Lawall, CPO, was charged with fitting her with a brace to support and protect her affected leg.

The specific type of bowing seen in both the tibia and fibula required an AFO or fracture-type brace to provide stability to those bones and prevent the lateral bowing from becoming worse.

Even then, in the early days of her care, at 18 months old, “she was spunky and always in good spirits,” Lawall remembers.

Since then, the original brace has had to be replaced often, due to her rapid growth. Katie’s dad, John Verdi, points out that she’s very tall for her age, and has needed to be refitted for new braces every six or eight months to a year, depending on her growth rate during each period. Naturally that has meant frequent visits to visit her friends at Lawall: In addition to Harry Lawall, Katie has worked with practitioners Heather Michalowski, CO, and Charlotte Cornell, Board Eligible Orthotist—all of whom consider it a treat to welcome Katie’s arrival. 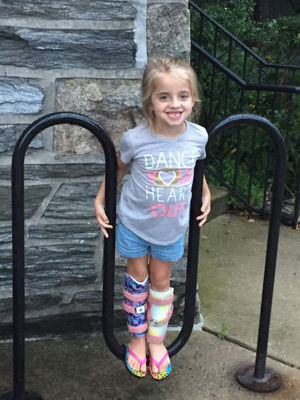 To complicate matters, a fall on the playground when Katie was 5 years old caused a break in her right leg; the same deficiency in bone mineral density that was likely responsible for the original curvature in Katie’s left leg had apparently weakened the other leg, as well.

The broken right tibia had to be protected with a cast, which Katie wore (with the style of an evolving fashionista!) for 11 weeks, since her bone density issues demanded a longer-than-usual healing period.

Unfortunately, John explains, Katie later required surgery to implant a steel rod in the weakened right tibia, followed by a 17-week recovery period while the leg healed once again.

As a result, today Katie sports two recently fitted braces—exuberant and colorful designs she chose with her usual prompt decisiveness. 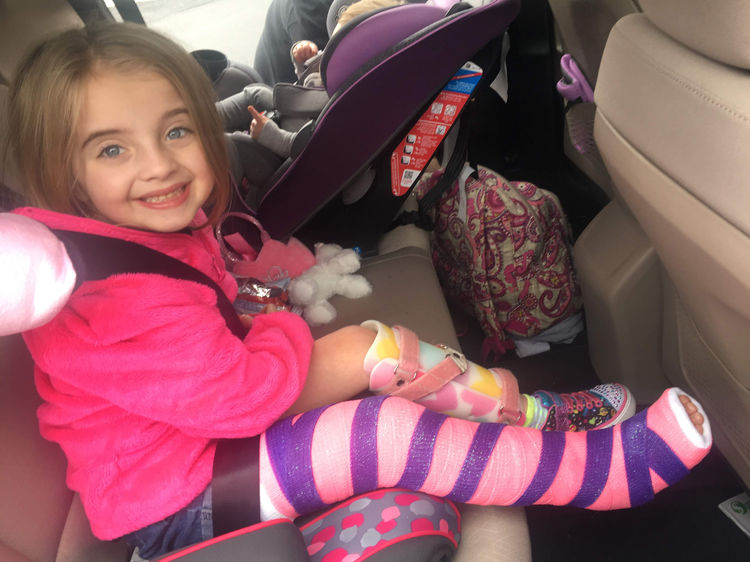 The post-fracture brace was designed to stabilize the right leg and prevent the fracture from returning or worsening— Lawall describes it as “basically a removable cast; it serves as circumferential protection of that fracture to make sure that it heals properly and is less likely to happen again.” 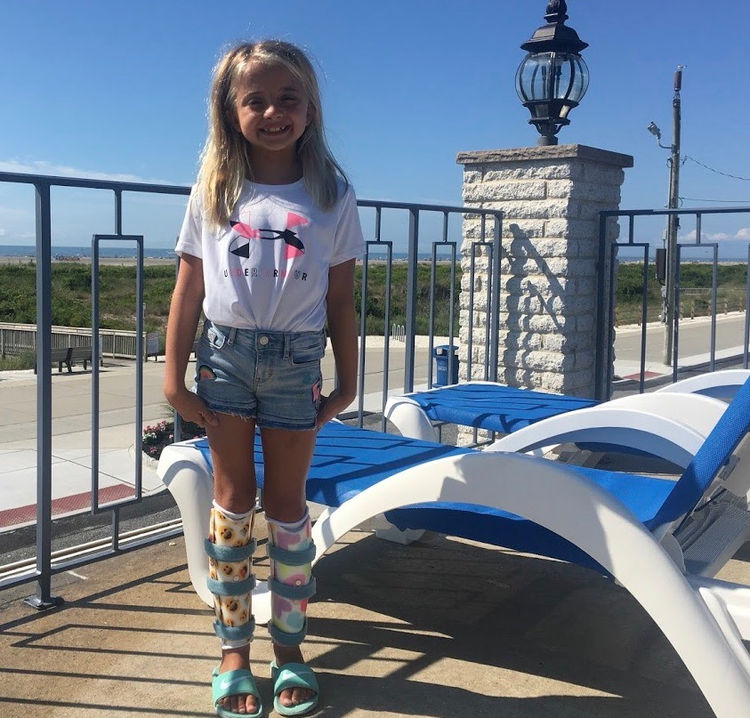 Cornell explains that although initially the two braces were designed for different purposes, “over time they’ve evolved into the same brace, because she tolerates this style of brace so well—and the doctors liked how it has worked out for her. On both sides we have a clamshell tibial fracture brace without a footplate; the pieces enclose the lower parts of both legs, holding them in better alignment and providing more overall stability.”

But it’s the way Katie not only deals with, but dominates, her diagnosis that impresses those she meets and befriends along her way.

“She really took to Lawall’s,” John recalls. “She gets excited when she goes for a visit. Even when she doesn’t have to go for her braces, if we’re in the building (Nemours/A.I. duPont Hospital for Children), she wants to go down and say hello to Heather and Charlotte. She’s a little shy around Bud—he was the first one to see her when she was a baby.” 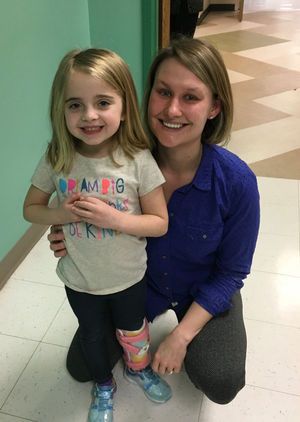 “She’s very spirited in general,” Cornell smiles at the memory of visits from Katie, “–but her spirits are always high! She’s always very energetic, and she’s very sassy and quick-witted—almost like she’s 7 going on 17! Playful, fun, spunky—and easy to talk to!”

Perhaps she has acquired that level of conversational ease and maturity because she so frequently meets with doctors, orthotists, and others in the healthcare industry; or perhaps it’s because both her parents are educators—John serves as Director of Annual Giving at Cabrini

University, while Stacy is a paraprofessional with the Garnet Valley School District in Glen Mills, Pennsylvania.

But it’s a skill that has prepared her to cope with the challenges of her condition surprisingly well.

“Most kids her age want to run around all the time,” Cornell points out, “but all day long she’s wearing these braces. It really can be a drag, especially in the summertime. But Katie makes it her own! She makes the braces exactly like she wants them, and she brings in her colorful sneakers to accommodate the lift that adjusts her leg length discrepancy—till everything is just as she likes it. She’s amazing.”

Katie has her own explanation for her very definite pattern choices for her braces (hearts and emojis, respectively): “I had hearts for my first brace; and I might have an emoji party–!”– so naturally her leg should be dressed to reflect the party’s theme!

“She always picks two different designs, one for each leg,” John confirms. “She doesn’t like to have both braces the same—and she always seems to choose whatever new design is available.” 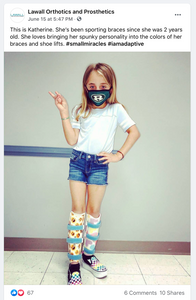 Although her neurofibromatosis comes with bone density issues that prevent her from many of the athletic activities and sports common for her age, Katie doesn’t let that stand in the. way of having fun: Although lessons won’t be possible due to the higher risk of injury, Katie

loves to dance—and who needs lessons to dance when you have a joyful heart guiding your steps?

Already rocking mini-supermodel style in her Instagram photos and selfies, she enjoys sharing moves with her friends on TikTok, and has already announced her intention to be as famous as the celebrities who introduce the dances.

Singing is another favorite exercise; she loves to sing and is looking forward to soon joining the youth choir of the Verdi family’s local parish—“a real choir!” Katie amplifies—where both her parents are already members of the adult choir.

And despite the combination of a broken leg, surgery, and pandemic conditions that have delayed her coveted lessons, Katie is already making her own waves and swimming like a mermaid during daily visits to their township pool, where her braces provide support—and propulsion—in the water, as well.

“She has a little bit of a hard time kicking,” John explains, “but she’s able to do the breast stroke and free style. She loves swimming; she’s like a fish!” 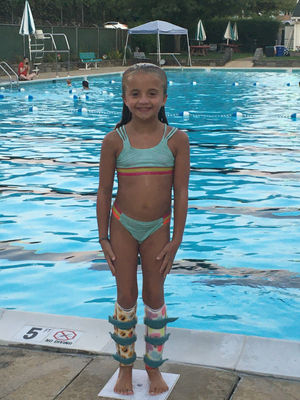 At the pool, on vacation, or on day trips to the beach with Stacy, her mom, Katie dons an old set of braces for water wear, to preserve the bright colors on her new pair from fading or damage.

School brings occasional frustrations, reminding Katie that although she participates in. gym classes and plays with her friends, she’s not able to do everything that they can.

“But her school has really acclimated to helping her be a part of different activities with the other kids,” John notes.

She was attending kindergarten at Grace Park Elementary in Ridley Township when she first broke her leg, and within two days the school proactively reached out to help, he remembers. 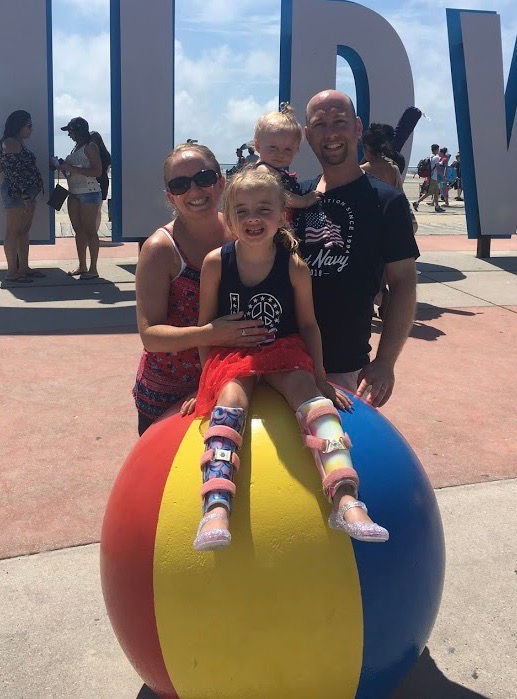 “They bent over backwards to help her out; it was probably a week and a half before she returned to school, but they helped with wheelchair accessibility, taking her to and from the bathrooms and helping her navigate the physical challenges. They just worked wonders with her! “Even her classmates helped, wheeling her around.”–and, as Katie reminded him, they sometimes vied for the privilege!

Perhaps age 7 is a little young to be making career plans, but Katie is already considering. her list of possibilities, and becoming a doctor is near the top.

“I think a child like Katie would do a great job in our field, also,” Bud Lawall reflects. “She has great energy and from her own experience, probably great empathy for others. We see a significant number of people who are working in our field (prosthetics/orthotics) because they’ve been there—they’ve seen and experienced it themselves.”

Her favorite subject in school, however, is art; she loves to draw, loves to write—so her potential is unlimited.

As the experts remind us, the clinical manifestations of neurofibromatosis type 1 are extremely variable, and it’s impossible to predict what may lie in Katie’s future.

Since tumors (neurofibromas) can develop anywhere on the body, internally or externally, Katie is monitored yearly by the geneticist to make sure she’s not developing any tumors; her head circumference is checked, and early signs of scoliosis will be watched for. An ophthalmologist will also check annually to make sure no tumor is 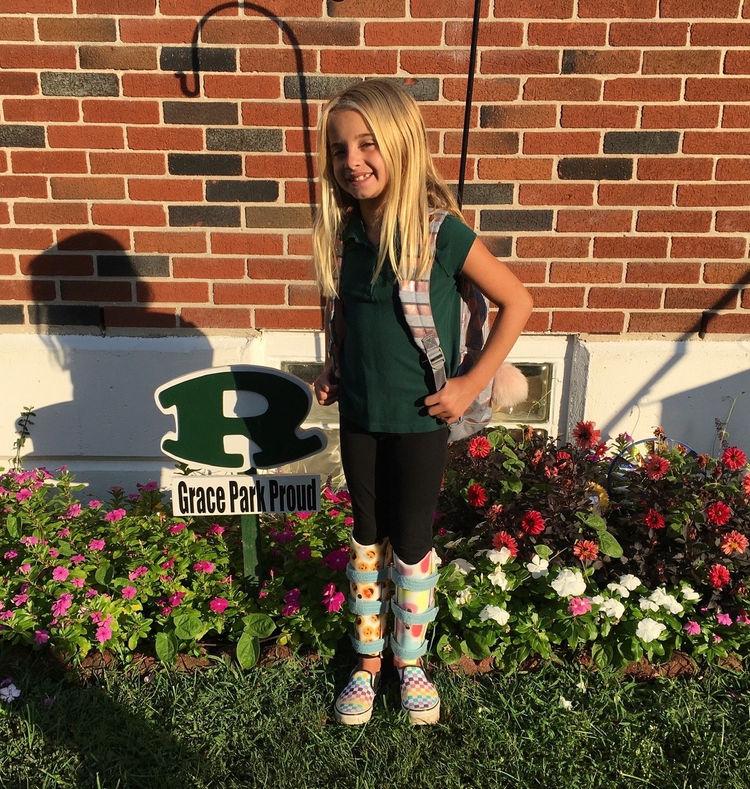 growing behind her eyes.

The tumors, if located, may be either cancerous or benign, and will be treated appropriately. Other medical concerns include hypertension, and potential learning disability.

“It all depends on how Katie grows,” her father says. “As of right now, there are no growths of any kind—and she may never have them.”

Is there a possibility that Katie may outgrow the need for braces as her legs grow stronger as she ages?

Again, “It all depends on how she develops through puberty and how her bones strengthen—and she takes vitamin D supplements to help with that. There is a possibility that once she reaches 18, she could be strong enough to not have to wear braces. A possibility,” says John Verdi, cautiously.

Considering her performance, her bright, forceful personality, and her confidence and commitment to date, it’s tempting to say that if anyone can do it, Katie can.

“I think she’s so inspirational in how she takes her situation and makes it her own,” concludes Cornell. “Because you don’t really expect a 7-year-old to just jump in and hold the reins to their own braces the way she does. She has just a great positive outlook; unlike a lot of younger kids that are dealt a similar hand.”

Despite all the possibilities and pitfalls that might lie ahead, it sounds like this “very sassy little girl” is very likely to grow into a determined young woman who says, with her signature smile, “I can and I will. Just watch me!” 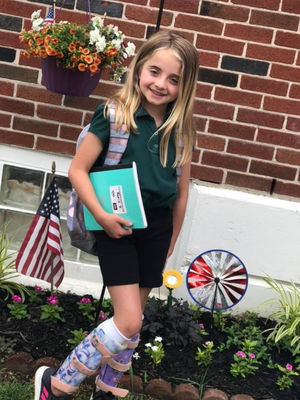