From the time he was a young child who experienced a playground incident that gave him whiplash and a neck injury, Jerry Cronin had also been subject to periods of lower back pain that he took in stride, as a normal part of life. But increasing problems with herniated disks and more frequent bouts of increasingly intense pain through his teens and college years finally brought him, at age 35, to emergency surgery, partial paralysis, and the opportunity to become the youngest individual to try out a state of the art orthotronic solution–-and one that worked beyond his most hopeful expectations!

Cronin recalls the long path that led h  im from an active and productive lifestyle to a crisis that began in his late 20s. He had been told he was too young for surgery, but newly married and looking forward to raising a family, he was determined to be proactive concerning the painful spasms he experienced. Unfortunately, a clear diagnosis continued to be frustratingly elusive.

In March 2013, however, Cronin experienced an “‘on-fire’ pain in legs, hips, groin—everything from the middle of my back down; and it kept getting worse.” He wound up in the emergency room, and following an MRI, he was quickly scheduled for emergency decompression surgery. Tests revealed a spinal cord trauma resulting from a rare but serious condition known as cauda equina syndrome, characterized by extreme pressure and swelling of the nerves at the base of the spinal cord. Causes vary, from a lumbar herniated disc, lumbar stenosis, ankylosing spondylitis, spinal cord infections, spinal tumors, or a gunshot or knife wound to the lower back. The cause of Cronin’s condition is still a mystery.

Meanwhile, post-surgery, he was unable to operate his successful business cleaning home exteriors, and wound up restricted to a wheelchair, walker, or crutches as he waited for the inflammation to subside before further surgery could be attempted. Several months later, it was determined that the damage to his spinal cord had resulted in an incomplete but permanent paralysis of his lower extremities; he was left with a severely weak left leg and a right leg only slightly stronger.

It was a long road for Cronin, involving “dozens of doctors and specialists,” a seemingly endless series of infections requiring more surgeries, 21 courses of antibiotics, and 19 rounds of steroids while he was laid up for months. He reports that “certain areas on my legs are dead, my feet are numb, I have bladder dysfunction and take medication and injections for bowel and bladder functions, but I’m still lucky—some people are paralyzed from the waist down.” 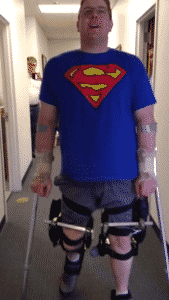 While undergoing therapy at the Elkins Park Moss Rehab facility, Cronin heard a member of his care team mention a new alternative to the standard orthotic systems that had proved inadequate for his needs.

At 6’4” and 260-265 pounds, I was too tall and too heavy for most of the KAFOs (knee-ankle-foot orthoses) available,” he explained. “I couldn’t propel a regular KAFO, so I just used the wheelchair, walker, and super-strong forearm crutches; but I needed to get off the couch. Someone suggested that I talk to Lawall to find out more about the new system; I was surprised to find out my wife had gone to school with Ann (Lawall) Roque as a kid, so I picked up the phone.”

Pete Michener, CPO, remembers Cronin’s first visit to Lawall’s Pottstown facility on November 13, and the logic that led to their endorsement of Cronin as a candidate for Ottobock’s new C-Brace®.

“We knew that with his lack of strength—incomplete paralysis of both lower extremities—a conventional KAFO or even stance control KAFOs would not benefit him at all and would be contraindicated. He did not have enough strength for the other KAFOs to advance his legs, and we felt they would actually cause further damage and potentially hurt him.”

Where the standard functions of previous orthosis systems had been limited exclusively to locking and releasing the knee joint, the C-Brace is the first to go a step further: The unique functions of the SSCO® (stance and swing phase control orthosis) allow both the swing phase and the stance phase to be controlled for the first time. This means the user has control through the entire gait cycle—in real time.

An ankle movement sensor transmits signals to the microprocessor-controlled hydraulic knee joint unit, which is integrated into a carbon fiber frame along with the electronics. The C-Brace’s microprocessor receives and processes sensor signals and controls walking in real time. In addition, a knee angle sensor measures the current position of the joint every 0.02 seconds, noting flexion of the knee joint and its angular velocity, and allowing the hydraulic resistances to respond appropriately, controlling flexion and extension based on the phase of gait.

Its advantages of support and stability while restoring more natural walking function seemed to make it the perfect choice for Cronin.

At that point only 60 people in the United States had been fit with the new C-Brace, and Cronin was the youngest candidate to be considered. Obtaining insurance coverage for the braces, still considered “experimental” by most healthcare insurance providers, would be an uphill battle, requiring extensive paperwork and evaluations, but Cronin played an active and enthusiastic role in the time-consuming battle to get coverage for these braces—potentially the most appropriate solution for his needs.

Six months later, in May of 2014, Cronin visited Lawall’s office and met with a team including Michener, Richard Bash, CPO, and a representative from Ottobock who helped to fit Cronin with a set of trial C-Braces in order to assess their suitability, and Cronin’s ability to succeed with them.

“He had broken two pairs of crutches before coming to us, and was experiencing compression of the brachial plexus and causing numbness down both his arms as a result of using crutches. His gait with crutches was slow—1.2 feet per second, well below the norm of 4.17 feet per second for his age group. He was just barely getting along with crutches. We were hopeful that the C-Braces would be the answer for him,” Michener remembers. “We were so thrilled when he walked!”

Cronin was also hopeful—but admits that the C-Braces far exceeded his expectations. “The first trial I had with them was awesome!” he exclaimed. “I was more than willing; they put the left leg on—which was my weakest leg—then they tried the second leg; then I started walking around. My pain was SO diminished I thought it was gone! I didn’t have to lean over or hunch on the crutches! The first time I stood up in two years was when I was in the C-Braces. It was absolutely amazing. My wife was crying. I walked and walked—it was the most I had walked in a long time!”

Immensely encouraged as a result of his success wearing the trial braces, Cronin resumed the battle with insurance providers and intensified his efforts to raise funds for the braces.

“Jerry was a great advocate,” Michener noted. “We supported him, but he wrote three pages back in May after he had been through the C-Brace trial, pleading his case.”

Cronin not only wrote letters, he spent countless hours on the phone with insurance company representatives, and went through six appeal processes—even including a trip into Philadelphia for a face-to-face meeting with his insurance company to make an appeal. In the end the braces were denied. 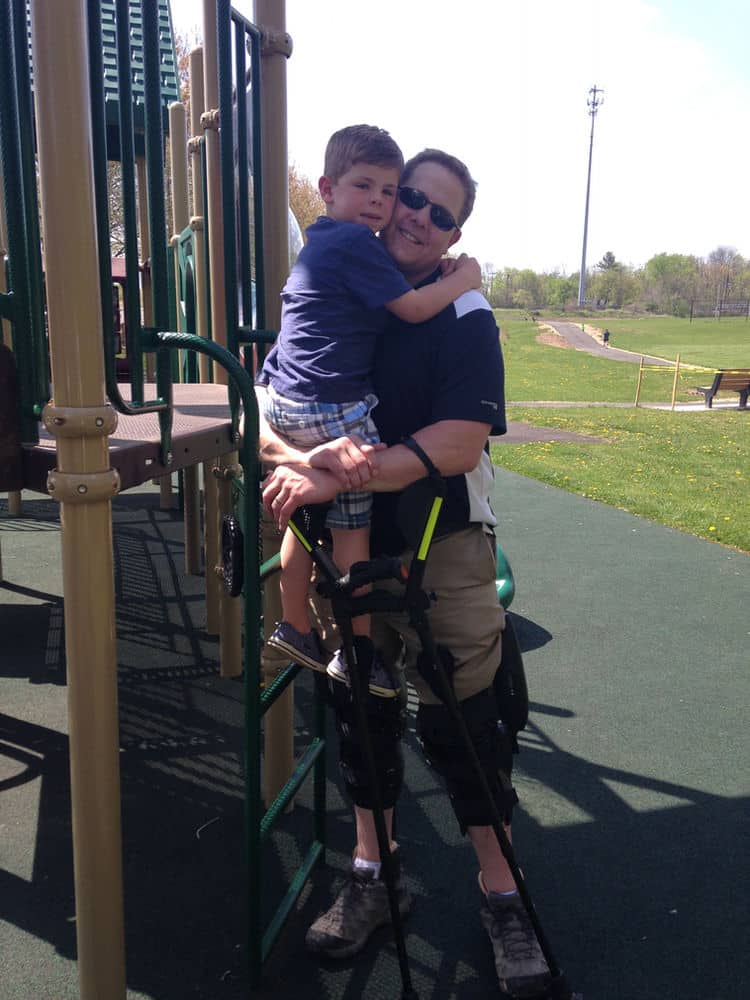 But in an amazing coincidence of great timing which Cronin calls ironic, “I got my insurance company’s final denial—a 7th level appeal—in December 2014, on the very afternoon I received a call from OVR (the Office of Vocational Rehabilitation) with their offer to pay for a major portion of the braces!”

Within 2 weeks of the approval Cronin was casted for his new braces, and the fabrication and fitting process was underway.

“It was a good 15 months I spent fighting the insurance company,” says Cronin “between the first recommendation in November 2013—until the fitting of my real C-Braces on March 17, 2015—a little bit of luck there, on St. Patrick’s Day. I had just turned 35, actually on March 5. We all went out to lunch and had a green beer to celebrate!”

Since then, says Cronin, his life has completely changed:

“Being down in a wheelchair, my legs were so swollen. Once I got the C-Braces, I lost 35 pounds in a very short time, just from having the blood pumping and my body being upright and active.”

Although his muscles and nerves limit him from running, there isn’t much else that Cronin can’t do, now.

“I don’t have balance, but the C-Braces make up for a large portion of that. It just amazes me; now standing is just second nature to me. I can brush my teeth standing up, I can make dinner—these are things that are just mind-blowing and huge for our family. Now I can hold my 1-year-old daughter—something I thought I’d never be able to do. And I coach third base for my 5-year-old son during his first year at T-ball. It really made him feel special.”

Michener, too, continues to marvel. “With the C-Braces, Jerry’s quality of life has improved dramatically. There have been improvements on the braces just within the year since his trial, including articulated ankles that make it much easier going up and down ramps, and sitting down and getting up from a chair. Ottobock has given the upgrades and sent support to us to apply them.

“Jerry is in better shape, has lost weight and trimmed down because he’s able to walk; it has definitely helped his physical fitness. He has been wonderful to deal with because he is so encouraged and optimistic, willing to try something new and committed to succeeding.”

Cronin’s commitment extends, too, to others who have experienced similar frustrations in getting coverage for the devices so necessary for his changed life. He is determined to spread the word that options like the C-Brace are available for those who may be close to giving up hope.

“I want them to know that they’ve got to fight for technology like this that has changed our lives permanently. You have to search on your own; be your own advocate; do your homework—make sure you’re going to the right places.

“I hope other people see this and know there is hope.”