Although every patient is unique, with individual issues, conditions, preferences and needs like no other, Pennsylvania hairdresser Grace Corbitt presented Lawall orthotist Juan Cave with a challenge that required him to think even further outside the box than usual in developing a custom designed orthotic solution. 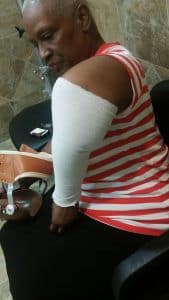 Corbitt’s 15-year history of her battle with advancing rheumatoid arthritis (RA) reads like a profile in courage. An autoimmune disease, RA causes the body to attack its own tissue and joints with slow and painful inevitability. Bone erosion and joint deformity can result, and even internal organs can be affected. When she successfully dealt with RA’s attacks on her knees and hips by undergoing replacement surgery for all four joints, the disease targeted another area—her left elbow.

After more months of struggling with increasing pain levels, Corbitt found that another joint replacement was the only pain-relief option left to her. Based on her past experience, she anticipated that the elbow replacement surgery and its aftermath would be as free from complications as her knee and hip procedures had been.

Unfortunately, about a year and a half post-surgery, the pain once again increased significantly, interfering with her ability to continue working. Corrective surgery to tighten the artificial elbow revealed a more serious problem; the RA had progressively weakened her bone to such an extent that a hole had formed, and a new, more substantial replacement elbow joint was needed—demanding additional and more invasive surgery.

Undaunted, Corbitt agreed to undergo the second replacement surgery. It did indeed relieve her pain, but her strength in that arm never returned—she was unable to lift more than five pounds, and began to wear a doctor prescribed sling to support the arm.

Ultimately it was discovered that the RA had continued its attacks on the weakened bone to such an extent that there was no bone left to support the artificial elbow joint, whose functional hardware had to be removed.

Although Corbitt was fortunate to retain movement in her hand and fingers, the elbow was non-functional. Her right hand was needed to support her left arm while she used her left hand—a not very practical solution, which failed to allow her to perform many of her normal daily activities.

Disappointment and frustration would have been natural and understandable responses for most people in her shoes. But Corbitt brought her problem, her trust, her patience—and some cheerful optimism—to Juan Cave.

Grace presented similarly to an upper extremity amputee because her left arm was essentially useless; but the great advantage she had over an amputee was the fact that she had the use of her fingers. Useful function of the arm could be restored by a device that could help position her elbow at the appropriate angle for each specific task she needed to accomplish.

Juan’s challenge was to create such a device—and with Corbitt’s help and input, working in partnership, he was able to conceptualize and build an orthosis that provided her with the greatest level of independence possible. Fabricating the device from scratch demanded that Juan draw on his experience with a variety of materials, components and concepts, even those developed originally for prosthetic use. 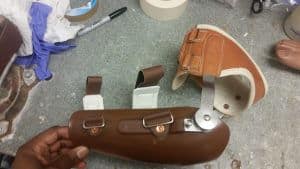 Beginning with raw materials, he created a custom elbow orthosis that Corbitt was able to use happily and successfully. The humerus cuff was made of leather, similar to the triceps cuff on a prosthesis for upper extremity amputees. The cuff ensured a total contact fit and increased the comfort level of the orthosis. The elbow joint was a Hosmer flail elbow joint with eight different lock positions. Initially a figure 9 harness—which is commonly used in upper extremity prosthetics—controlled the orthosis, allowing the elbow to be locked or unlocked by scapular abduction.

Over a period of several months, and after several fittings to adjust, fine-tune and improve its performance, Corbitt was using the orthosis efficiently at home and gaining confidence and independence. Eventually, the harness was removed because she preferred to manually lock the elbow in place with her right arm. 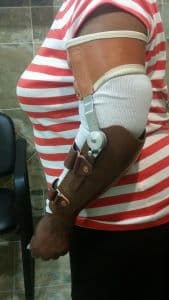 This is the case with many orthotic and prosthetic devices–– the end product has often evolved considerably from the original idea, but is greatly improved during the process. Through utilizing the device at each stage of development and working closely with the practitioner in a cooperative partnership, each patient actively contributes to the optimal outcome they achieve together.

The practitioner’s role is to critically evaluate each patient and provide him or her with a device that can be modified and improved as the patient progresses through rehab. Corbett’s enthusiasm, optimism, and commitment to fulfilling her own role in the partnership made an unforgettable impression on Cave, who admired her great attitude and outlook on life.

“Ms. Corbitt is a highly motivated individual,” he said. “When faced with a major life change she confronted the situation head-on, with a smile. With the orthosis she will be able to regain some of her independence and increase her ADLs.”

Today, Corbitt is confidently tackling activities she once thought were forever beyond her reach. She proudly reports being able to drive, perform household tasks, and cook in the kitchen. She has even started an exercise program and is on the path to a healthier and enjoyable lifestyle!

Encouraging others who are facing similar challenges is one of her new priorities; Corbitt wants to help them realize that, regardless of their situation, creative options are available to maximize their independence and dramatically change their lives.