Imagine trying to play a game of charades with your hands tied, wearing a gag, and you may have some idea of the frustrations some individuals with cerebral palsy experience when trying to communicate. Add that to the mobility challenges also faced by 19-year-old Brandon Kucowski, and you’re looking at a lifestyle that would daunt most people.

But Brandon is by nature a happy person with a family who is “in tune” with his feelings without relying on traditional channels; and they’ve found—and created—ways that allow Brandon to share and enjoy an exciting outdoor world far beyond the range of a standard wheelchair.

Diagnosed at 10 weeks with spastic quadriplegia, Brandon has been confined to a wheelchair because he lacks good organized control of his muscles, explains Ted Kucowski, his father.  “He can’t sit up on his own, because he could go from being limp one moment to being very tight with tone the next moment. He can move his muscles, just not with the control you or I would use.”

As muscles are affected by his wheelchair confinement, Brandon also wears orthotic braces that help to control spasticity and delay muscular atrophy by keeping his hands, feet, and legs in the best possible position.

The lack of muscle coordination also makes it impossible for him to structure words, Ted notes, although his intelligence is evident in his eyes and his responsiveness—and his success in school.

Brandon attends New Egypt High School in Plumsted Township, New Jersey, his mother Jen explains. “He technically graduated last year as a senior, but the school has an 18-to-21 program so he still gets to go to the high school for two more years. He’s able to get physical therapy, occupational therapy, speech therapy, gym, music, and more.”

Using a Tobii Dynavox eye gaze device, Brandon is able to use a computer to communicate. The device tracks his eye movements as he uses his gaze to make choices without verbalizing or keystrokes.

He likes music and dancing, and enjoys watching music videos, Jen reports, “One of his most frequent choices is Taylor Swift, and his favorite TV show is ‘Dancing with the Stars’!” she laughs.

A Lifetime Commitment to Quality of Life

From the beginning, Ted and Jen actively determined to make Brandon’s life experience as rich as possible.

“We try to make the most of every day,” Ted explains. “We keep Brandon included in everything we do, and we try not to let his disability hold him back.”

Jen notes that Brandon was always an outdoor kid, who didn’t want to be stuck in the house.  “We started taking him into the swimming pool when he was a baby; as he grew, I’d go out and find active experiences for him. He tried whatever was out there!”

She recalls the many sports and activities he participated in during his youth, with his brother Dylan—just two years younger—playing alongside him and running the bases with Brandon in the chair during Miracle League Baseball games.

Then Ted began doing triathlons with him.

“We kind of stumbled into it by accident,” recalls Ted, a 21-year veteran police officer who also runs his own detection canine business. “When Brandon was young, probably around age four, he seemed uncomfortable and bored. I’m very active myself, so I took him for a run in the baby jogger, more so out of my frustration from sitting around and not being able to do anything for him. It was actually soothing for him; he really enjoyed it! He seemed to enjoy the fresh air and the movement, the stimulation from getting the breeze in his face, so that became a daily routine. We wound up doing a 5K running race together, and for the first time as a parent I actually heard him laugh!” 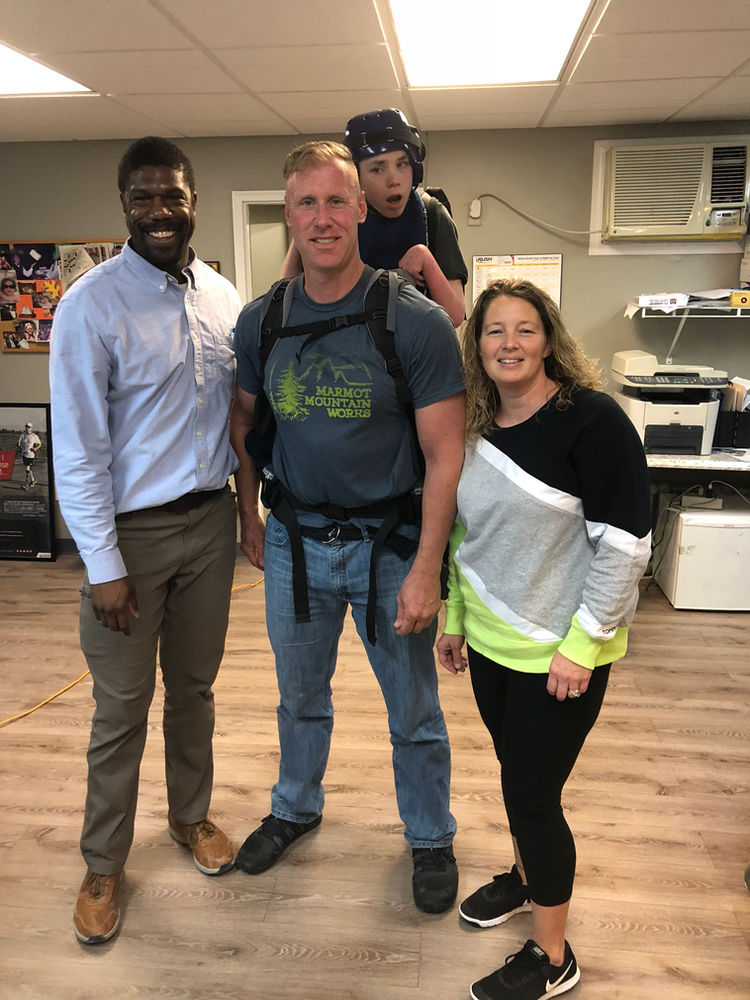 Being a participant in all the activity and excitement—a part of the crowd of runners—was thrilling and energizing for Brandon, and when Ted realized how much he enjoyed it, he not only continued running in 5K racing competitions with his son, but also took them to the next level:

Inspired by the story of Dick and Rick Hoyt—a father and son team who competed in marathons and triathlons together, with Dick Hoyt providing the mobility for his son with cerebral palsy—Ted stepped up his own training and began researching disabled-sports equipment.

“I saw how much enjoyment Rick Hoyt was getting from being involved in everyday activities with his father, while they were spending quality time together; I wanted to do that for my son, too.”

They flew to Atlanta, where Eagle Sports Chairs custom built a racing wheelchair for Brandon, and then signed up for the New Jersey Marathon in 2007.  “We went from running a five kilometer race (3.1 miles) to a full marathon, which is 26.2 miles—and we had a blast!” says Ted.

Together, they turned in a “decent” time of four hours and nine minutes, he recalls. “From there we started doing more running races, and that evolved into doing triathlons.”

Since triathlons include swimming and biking, as well as running, Ted devised a solution for towing Brandon’s wheelchair behind his bicycle, then simply tied a rope around his waist, attached it to an inflatable raft that carried Brandon, and towed him along during the swim portion.

“Altogether, we’ve done over 50 triathlons together, including a half Iron Man triathlon.  We’ve done two full marathons and 13 half marathons.

“The greatest thing about doing that,” Ted jokes, “is that you spend so much time burning calories that you can eat whatever you want and get away with it!”

Although Team Kucowski took a sabbatical from competition a few years ago, when Brandon began experiencing more frequent seizures, his parents continued to search for other outdoor activities that could include Jen and Dylan, too, in more active roles than as cheering squad.

“I thought how cool it would be if we could go hiking as a family, with everybody included to share the enjoyment,” Ted speculated.

So he began searching for solutions. Modified kid-carrier backpacks designed for toddlers were too small for Brandon, so when Ted bumped into Wayne Lawall, President of Harry J. Lawall & Son, Inc., at a local deli, it appeared that kismet had taken a hand.

“We knew Wayne from having Brandon’s orthotics done in the past, so I mentioned it to him and showed him a picture. I was looking for someone who could sew nylon to make the carrier bigger and sturdier, and I thought Wayne might know someone.  Instead, he told me to bring it by the office and he’d have his staff make it right for us.”

Jen agreed at once that it was the right choice. “Wayne knows what will make Brandon comfortable—the best body position for him,” she told Ted. “And he’s going to make it safe, because he doesn’t want Brandon to get hurt.”

The design and fitting process took several visits: “At first Brandon was very uncomfortable in it, because his groin is very tight, and his legs are almost scissor-like, with his knees touching when he sits. The carrier was doing quite the opposite; it was spreading his knees apart,” Ted remembers. “But as we progressed through building and modifying the design, he started to become more relaxed and he was spreading his legs out. Wayne explained that ‘Every step you take is going to help stretch his legs out! He’ll feel that pressure resonate through his body. It’s going to be almost like physical therapy while he’s having fun!’”

This unexpected benefit was a gift that will make family hiking trips that much sweeter.

Ted concludes that “Wayne and his team at Lawall did an amazing job. His entire staff are helpful and nice beyond description.”

The admiration is mutual: “Brandon’s parents have been great; they definitely go above and beyond,” notes Lawall, who has worked with the family since Brandon was fitted as a small child with ankle-foot orthoses designed to hold his feet in a neutral position to prevent contractures, and braces that likewise prevent contractures and deformities in his spastic hands. “Whatever Brandon needs, they’re there for him.”

The carrier Ted hoped to redesign was modified by Lawall to fit Brandon so that he could be safely carried during future hikes.

“Brandon doesn’t have a lot of control of his head or his extremities,” Lawall observed. “His head might be popping forward and smacking his dad in the back of the head; or his neck might be thrown back, causing strains or a fracture in the cervical spine. So it was important to make sure that he was stabilized and secure in the device—so that as his dad was climbing and hiking, Brandon wouldn’t get hurt.”

Since his hip adductor muscles are very tight and the device caused his legs to spread further than usual, padding was also added “so that Brandon would be comfortable, and at the same time get a good stretch,” Lawall explained.

And since the carrier was completed in October, the family has taken a few successful hikes, as the radical weather permitted, and they look forward to more opportunities.

Brandon did not remain idle while waiting for his hiking carrier, however.  Jen describes rides taken on his adaptive bike, snowmobiling, a trip to Vermont to enjoy an adaptive skiing experience he’s eager to repeat, and the bowling he has continued to enjoy throughout high school.

Like many of us, Brandon communicates effectively without words—with an affirmative smile, or a relevant glance at what’s in his thoughts.

“Most of the time Brandon is happy,” Jen observes. “But if something’s wrong, he’s going to let you know. If he can’t verbally get something out, he’ll make little noises, or tell us with his expressions. We just know,” says the mom who does, indeed, know her son’s wishes.

And since he shows such clear delight in being outdoors, with the wind in his face, and the adrenaline of speed and energy adding fuel to the fun, the Kucowskis continue to focus on future plans built around those elements:

Ted mentions a scenic hiking trip to Bushkill Falls in Pennsylvania, carrying 70-pound Brandon along mountain trails sure to tax even an athlete’s energy.

“That’s not light,” he admits, “—but it’s not easy pushing someone else through a full marathon or triathlon, either. I do it because I know it makes him happy—and a little bit of physical discomfort for myself is well worth the return on investment that I get from his happiness and enjoyment.”

Jen looks forward to their future travels to Canada, too—to a place with an adaptive snowmobile and an opportunity for Brandon to ride on a dogsled.

“…and we’re looking for a place where he can try ziplining, too!” she adds, laughing.

“The real story here,” believes Lawall, “Is the impressive dedication that these parents have, and their devotion to their child—it’s amazing.

“We’ve seen that the amount of input that the parents give to these children is directly related to how well they do in life—and the Kucowskis have gone way above the norm.”